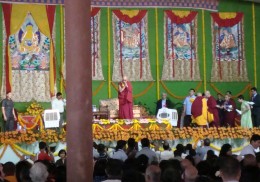 A friend invited me to join a four wheel drive taxi, have lunch at a nice mediterranean restaurant in Bangalore and see the Dalai Lama speak. Travel in India is not always easy so I pondered the three hour drive from the peaceful city of Mysore to the busy metropolis of Bangalore on one of my treasured rest days off from an intensive yoga practice. Ultimately I decided that after eight years of nearly daily Vipassana meditation practice that I wanted to see the Dalai Lama in person and this was my chance.

With just ten minutes to spare before the Dalai Lama was set to start we all felt like time was perhaps not on our side. But then our driver pulled up and we got out of the car right at the VIP entrance where tried unsuccessfully to buy our way in. After that small failure we found perfect seats in the out-door auditorium on the left hand side. With shade, fans and a cool breeze we sat comfortably behind a group of three Tibetan monks. There was a large screen projecting the image from the stage so we didn’t need to worry about not being close enough. It was like having pretty good concert seats and arriving at the perfect time. The notion of a large crowd in the center of Bangalore has the feeling of struggle for me, but this group was peaceful and everything was easy. I don’t know if it was the Dalai Lama’s energy or our good luck but we got there so quickly and when the speech was over our driver pulled right up and whisked us away for a last round of shopping before an easy trip back to Mysore.

Humility and warmth emanate from all around the Dalai Lama. Beginning by stating that there is no difference between himself and others, he affirmed the notion that everyone has the basic right to happiness, that everyone has Buddha nature so all can be Buddha too. The path of Buddhist meditation teaches practitioners how to have a calm mind and that a calm mind is the key to health. The Dalai Lama shared a story about how he tried to heal an enlarged gall bladder for many years with traditional Tibetan medicine with little success. Recently he saw a Western medical specialist and had his triple sized gall bladder removed lest it explode and endanger his life. Finally when the two hour operation ended the doctors and nurses expected a long healing and recovery time due to the large size of his gall bladder and the Dalai Lama’s age. When after only five days he was released from the hospital, he attributed his quick recovery time to the calm mind that he has gained through meditation practice and realization of his Buddha nature within.

In a very sweet broken English he said, “Anger eats immune system, science says now too. Human intelligence is really precious, a calm mind very important . If the mind is disturbed by emotions then the basis of life is also disturbed and then the whole view becomes biased, so we can’t see reality clearly. In order to see reality the mind must be calm, then we can investigate reality and see clearly. Once mind is disturbed then you can’t see.” Speaking about the importance of a calm mind he suggested that if our basic mental attitude is quite happy then disturbances come and go like waves on the ocean come and go. Yet at the same time he acknowledged that emotions have a biological factor that can be hard to deal with. For example, anger is associated with the ability to fight and fear is associated with the ability to run for your life. Although these are positive things for survival in an ancient evolutionary context, with the cultivation of Buddha nature we can begin to use human Intelligence to compare longterm and short term sensations and develop awareness. Meditation means that you can train your mind so that when anger develops you can separate from the anger, de-tach and watch it. Once you separate yourself from anger so that the dominance of the emotion lessens you can get free from it and find peace.

The Daial Lama said, “Anger and hatred are self-destruction.” When you have problems you should not let negative emotions rule your life. A calm mind means that all your actions will be more effective. He continued by presenting an alternative notion of happiness, saying that, “Everyone wants a happy life. The ultimate source of happiness is satisfaction. Sometimes physical suffering can bring satisfaction, like sports. Happiness is not always pleasurable experience but a happy life is satisfactory life. Pay more attention to inner quality, inner value.” Yoga practitioners can particularly identify with the definition of happiness as a feeling of satisfaction after a good, hard and deep practice. Not everything needs to be easy on the first try in order for us to be happy. Sometimes we enjoy the process of working for our dreams and the satisfaction of enjoying each step along the way.

Desire and ego are needed for the strong will, determination and desire for boddhichitta that spiritual practitioners must have. So in a sense, the In a sense, the Dalai Lama said that strong self esteem is needed for spiritual practice. The key according to him is to base all drive and determination in positive action along the spiritual path. If the emotion or ego is based in biased, negative desires that engender further attachment into the material world, then it is not a good use of your strength. But if you channel your strength, drive, and desire into spiritual practice you will develop the kind of tenacity to be a strong force of good in the world. He quoted one of the 46 minor precepts in Buddhism that says that if you see harm being done and do nothing you also have done something wrong yourself. You must take appropriate action to stop the wrong, not out of anger but out of compassion. The tricky thing is to take appropriate action while maintaining genuine care for both the victim and the perpetrator of violence just the same.

His final statement was a positive dream for the future that the 21st century should be a century of dharma because the 20th century was of killing. A goal that he would like for us to have is to demilitarize the world, starting with the individual dedication to a peaceful life. This will only come with action, not prayer. For the individual prayer is great, but for community we need action. Karma means action. Talking too much with too little action means that we will not realize the true interconnection of all being. These human values he concluded have nothing to do with religion but are universal. India’s gift to the world is to share the ahimsa concept of non-violence and religious tolerance so that the world can experience this living tradition of harmony and peace.

After this wonderful flowing wisdom the Dalai Lama smiled and said “OK, my talk finished. Thank you.” Birds chirped in the background while he spoke, a gentle wind blew through and we did, for those two hours of his talk, live in harmony and peace.