Richard Freeman and Mula Bandha over Coffee on a Friday Afternoon

As a teacher I rarely get the chance to take a yoga class. When I do I treasure the chance to be a student. Traveling to India to study at the K. Pattabhi Jois Ashtanga Yoga Institute is one way for me to take time to rekindle the fire of Ashtanga Yoga within my own teaching. But there are many bright flames within the Ashtanga Yoga tradition. Certified Ashtanga Yoga Teacher Tim Miller visits my studio in Miami and each time I partake in his classes I feel blessed to be so close to the spiritual heart of Ashtanga Yoga and re-inspired for my personal practice. I also recently had the opportunity to meet one of the brightest Ashtanga Yoga teachers I have ever met, Richard Freeman.

After nearly two months of traveling, five weeks in Europe and three weeks in Asia, my first destination was Chicago. I love the community of yogis in this northern city and I have been to teach at Moksha Yoga six times over the last five years. What made this trip different was the fact that the Certified Ashtanga Yoga teacher Richard Freeman was leading a Teacher’s Intensive during the same time period that I was scheduled to lead a week of Mysore classes and a weekend workshop. This isn’t the first time that Richard and I were scheduled to cross paths. We were supposed to teach for the same weekend in San Francisco this Fall, but when I found out I cancelled. I found out about our similar dates here only a few weeks before I arrived in Chicago and I was uncomfortable about teaching at the same time as this highly venerated teacher. But I also wanted to meet him and I thought this was my chance!

Some of the students at Moksha were even taking my Mysore classes in the morning and Richard’s training in the afternoon. So when a student suggested that we all meet for coffee one day I jumped on the opportunity. I was nervous when we arrived at the Starbucks and I saw Richard waiting inside. I felt his beauty and brightness shining right from the heart almost immediately as we started talking. We talked about jet lag, our recent teaching trips to Tokyo, travel, home, family and his history with the Midwest. Just to be in his presence felt like a gift. Then as we were leaving he invited me to attend the second portion of his philosophy class that afternoon on the last day of his training. I was humbled and honored by the invitation and even though this was the only afternoon that I had off during the week of teaching and I was planning on going shopping there was no way that I could say no.

I arrived just before 3 PM and got settled in the room where I recognized some students from my workshop and others from Europe who traveled to Chicago to study with Richard. As he entered the room Richard stopped to say hello and told me he would introduce me to his class. I protested and said that I was happy to just observe quietly and melt into the background. He gave me a quirky look and went to the front of his class and proceeded to introduce me anyway. He welcomed me to his class with so much graciousness and generosity that I was embarrassed to receive such a gift. I had managed to a short shopping excursion where I bought him some of the best chocolate in Chicago from a brand called Vosges, but I stupidly forgot in the apartment where I was staying. So I decided that I would write a blog about my experience to thank Richard. This is my expression of the deep gratitude that I feel for getting a glimpse of what an amazing teacher and person Richard Freeman really is.

The topic of the class was on the scripture called Aparoksanubhuti by Shankaracharya, which is a non-dual text that Richard said was one of KPJ ‘s favorites. This text talks about mula bandha among many other things and I have included the sutra below that Richard spoke at length about.

That which is the root of all existence and on which the cessation of the mind is based is called mulabndha, which should always be served since it is fit for raja-yogis.

Richard says that mula bandha is the cessation of thought so it cannot be something you think or try to do. It is more of a seva, which means service or to attend to and the idea is that mula bandha is treated like a deity and you do seva to the deity at the sacred temple sitting deep within the pelvis. The balancing of energies on the pelvic floor is the way to consecrate the temple and then the goddess serpent Kundalini will stand up when she wants to. The voyeur of the ego prevents the goddess from awakening because you have to invite her as the sacred flame at the root of the pelvic floor so that she inhabits the temple. Mula bandha according to Richard is not a mechanical thing but more like a devotional experience. He suggested doing a bhakti puja to Ganapti in the pelvis to get mula bandha and to invite the god into the temple at the base of the pelvic floor. In the form of the goddess, “sri” is her name. Then with a cheeky smile Richard said that this is the secret part of the lineage and that he shouldn’t have even told us this. I thought for a moment about not sharing his definition of mula bandha but I decided to share it anyway. I hope I haven’t committed an Ashtanga crime.

I was riveted by this discussion and hung on his every word. I found even more serendipitous because I had spoken with a good friend and fellow teacher recently about Richard’s definition of mula bandha and I just so happy to hear it directly from the source. In this midst of my own teaching I found a true teacher. I am grateful beyond measure and I am inspired to study with Richard Freeman again in the future. If you get the chance to meet him don’t pass it up! 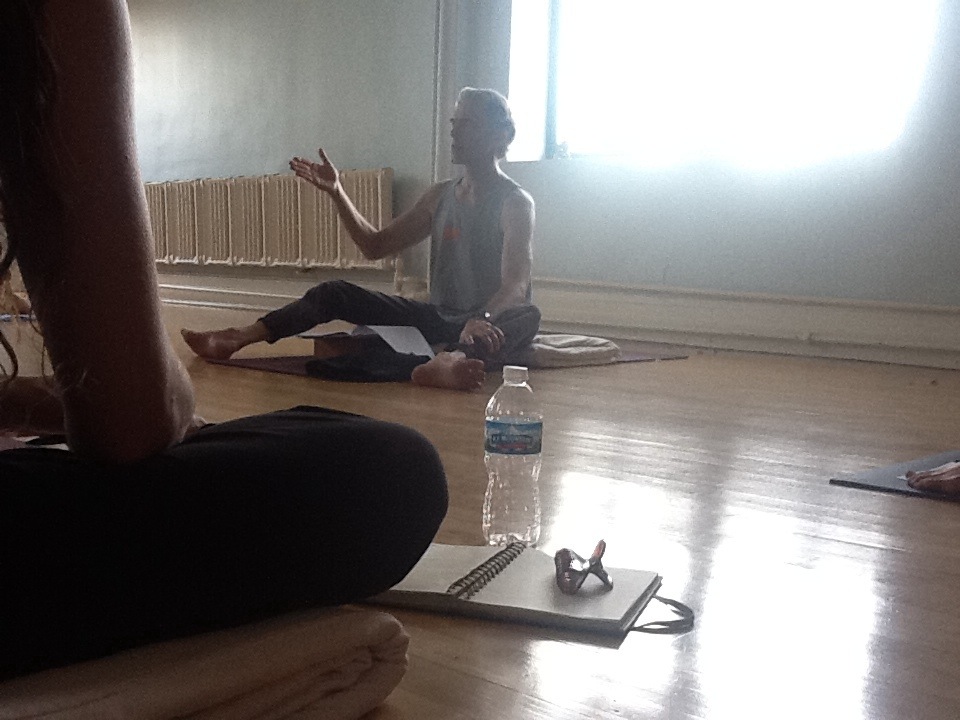