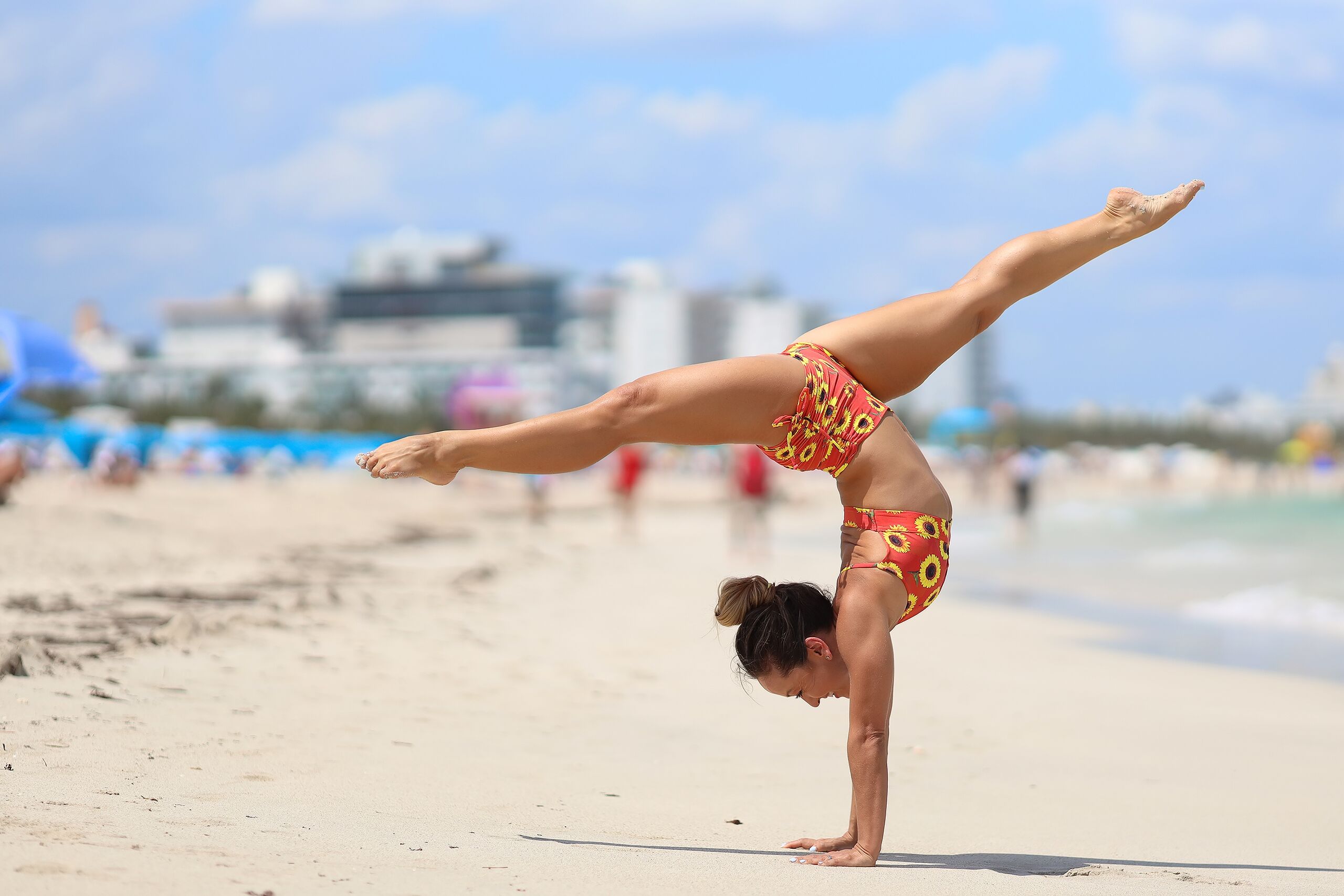 Would you still love me if I don’t handstand anymore? By Kino MacGregor

So much of the contemporary yoga world is tied to ableism. Young students born with natural physical talent or those with years of dance, gymnastic or other training excel to soaring heights and are lauded as champion teachers. Students of yoga give these yogis talk time and elevate them to a high status based on the prowess of their physical bodies. But what’s at the heart of a system of preference that places physical form as the highest standard of value?

I speak as someone who has benefited from this paradigm. It is doubtful whether I’d have 1.1 million followers on Instagram or a popular presence on social media if I hadn’t posted advanced yoga poses that caught the eye of would-be yoga students. Ashtanga, the style of yoga that I practice and teach, is one of the most physically strenuous styles of yoga and can sometimes be seen as excessively focusing on the physical. It’s not a secret to say that I have benefited from the privilege of being young and able-bodied when I started the practice. While I was never a dancer or a gymnast or anything physical before I started yoga, I did take my first class when I was 19. Starting relatively young (although now you meet yogis who did their first class at 5!) allowed me ample time to work through my physical limitations and develop my physical gifts. Flexibility is something that, while I have to work and practice at it, came more easily for me. Strength is something that I still struggle with to this day. And yet, there is SO much more to yoga that just the poses and the physical component of the practice.

My Mom did her first real yoga class at 75 years old, two months after my father passed away. She, like many people who come to yoga, was carrying a great loss in her heart. While she hasn’t jumped head-first into a dedicated yoga practice like I did, I can see how the practice opens her heart to healing. She’s happy to do a plank, but handstands and even headstands are out of the equation, at least for now. Even though she may never put her leg behind her head or do lotus position (she has two total knee replacements), this practice has the potential to lead her down a road of personal awakening. And truly, yoga has that same potential for every human being. So, I have to wonder if in the quest for the perfect handstand and deeper backbends we are missing something about the true promise of the yoga practice. I came to the practice of yoga in search for inner peace. The poses for were always a physical means to a spiritual end. It can be tempting and even easy to get lost in the world of physical poses, so I have to ask what can we do as yogis to return to the spiritual center of yoga’s essence, for ourselves and for our community.

For thousands of years human beings have asked questions about the meaning of life. To be a spiritual seeker is a universal trait among those yearning for depth. There have always been those whose hearts burn with a quest for something beyond. This searching is the heart of yoga. Poses, breathing techniques, meditation, moral guidelines, and philosophical investigation are the technique used to lead practitioners into a mystical revelation of universal truths. Yoga is for the spiritually  hungry, for those who desire to directly perceive the eternal, timeless presence of the Divine. Seen in this light the obsession to handstand obsession may actually be a trap of the ego if you never move beyond it.

To be honest, handstands are fun, and they bring so many people to the practice so I am not against handstands. I personally love them! But they are, like any pose, quite frankly, not the goal. Fixation on the poses is a period that every yogi goes through. I would never want to take that experience away from yoga students. There is no way that I would have been willing to release my attachment to learning how to handstand when I was a new yogi, more than 20 years ago. Looking back, I can see how my insatiable desire to handstand stemmed from a paradigm of self-worth that I no longer subscribe to. But I had to go through that paradigm in order to unlearn it, grow and evolve to where I am today.

In Western Euro-centric, North American culture there is a high emphasis on achievement and the assignment of value based on measurable metrics of success. The handstand press in the world of yoga is the physical equivalent to a sweet corner office in the corporate world. It shows that you’re somebody and that you’ve accomplished something. Judging your value as a yogi by how long you can hold a handstand exports the mindset of worthiness as tied to external standards exists to the yoga world. But, that’s not a bad thing. Unlike cultures that only offer ladders to higher and higher corner offices, yoga sets up the framework for you to see and experience your standard of achievement for the very purpose of helping you move beyond it. We are all in some ways caught in the communal dream of our cultures, familial, ethnic and global. Yoga works by bringing the often unconscious patterning of the mind to conscious awareness. Once these deeply held patterns come to the light they can be released and transformed. So if you find yourself bound by the model of self-worth as defined by achievement or happiness as being dependent on external standards, then yoga will show that to you in crystal clarity so that you have the potential to shift, evolve and move to a whole new, perhaps more loving, paradigm.

It is said that there are as many yoga poses as there are living beings. If you think about that, it’s astounding. Just taking in the total number of human beings on the planet right now means that there are nearly 7 billion yoga poses. There is no way that anyone could learn or even discover all of those poses! What a relief. For those who learn right away that they will never achieve all the crazy advanced poses and contort their bodies into the twisted shapes that grace the most-liked pictures of social media, yoga presents a new paradigm from the first breath. Either learn to love yourself as you are and release the need to achieve anything or you’ll be overwhelmed by the practice. For yogis whose physical potential allows them the grace to bend, twist and lift like gods the temptation to believe in your own magic is high. It can feel like you’re flying, but like Icarus, you may get just a bit too close to the sun. What I mean to say is that the combination of both success in advanced yoga poses and elevation to a high position based on physical achievement can actually inflate the ego and foster a kind of self-aggrandizement that only leads to a big fall. When you’re injured, hurt, tired, or otherwise unable to “perform” you may find yourself feeling unlovable.

I’ve been through that and to be honest I am sort of going through a period of reassessment right now. If you follow me on IG, you may have noticed that I’m not posting as much. I feel like my identity is influx, like there is some transition or process that I’m in the midst of. It feels like I’m a bird molting and I just need time to myself to go through whatever it is I’m going through. I don’t feel inspired by the things I once did. It’s no secret the last two years were filled with difficulties for me. Sometimes my mind reflects on it all and I’m filled with a mixture of remorse, confusion and depression. And other times, I feel lighter, freer, more myself in some ways and also much less sure about everything. There are people who were once devoted students who have now turned into my biggest haters. It’s been hard for me to make peace with that. But really, it’s not about them, and their process is really not about me. I’m less interested in yoga pose tutorials and less interested in the physical aspect of yoga at all. I’m practicing every day, but placing a higher emphasis on sitting meditation and spiritual questing. There are large questions about life and meaning that sit heavily on my heart and those seem to take priority over whether or not my lift-ups are as high as they once were. I’m writing a new type of book, one that will not have a single yoga pose in it. Perhaps there is a part of me that is crafting an identity truly beyond the pose.

So, the real question is not whether or not you will still love me if I don’t handstand anymore, the real question is whether or not I will still love myself. And that is the essence of yoga itself, a quest for meaning and value beyond any external standard of achievement. If you can only love yourself when you’re a certain size or shape or when you can perform certain actions, whether it’s a handstand or anything else, then self-worth is still tied to achievement. It’s not that there isn’t joy in a job well done or in achievement—there is great satisfaction in it. But the inherent worthiness of who you are cannot be tied to anything external. You would still be worthy of love if everything in your life failed and you never managed to do a deep forward bend. Let that sink in for awhile, especially for those of who you feel like a failure. I am letting that sink in for myself too. You don’t need to succeed or be at the top of your game to be lovable. In fact, if you don’t open your heart to being lovable as you are, right here and now, then nothing you do or achieve will ever feel full and compete. Love is your true nature and unless you are able to let that in, whatever you do will feel hollow and empty, like a shadow. But if you are able to start with love, complete, total and full, then whatever you do, no matter how small and no matter how big, will be a miracle of joy and a vital contribution to Divine play called life.